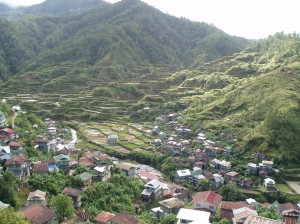 The Cordillera Administrative Region (CAR) in the northern Philippines is a landlocked, mountainous, and isolated area due to poor infrastructure. Severe poverty persists in upland and highland CAR, where 92% of the population is comprised mostly of indigenous peoples (IPs), who mainly engage in agriculture. The reasons why their agricultural production is low and unproductive include the following: (1) the plots are small and fragmented; (2) farmers lack market information, marketing, appropriate technology and credits; and (3) they lack communal irrigation systems. The Cordillera Highland Agricultural Resource Management Project (CHARMP; 1996–2005) co-financed by the ADB successfully increased the income of poor people targeted by the project. In February 2006, the Government of the Philippines (GOP) and the IFAD started the preparing for a follow-up operation to extend targeting the marginalized people in this region.

The IC Net team during the inception mission collected background information on the rural sector and proposed a development model that consolidated and scaled up the successful activities of the CHARMP, while seeking innovations to enhance the impact on disposable incomes and livelihoods of the rural poor in the CAR. The team carried out key informant interviews and focus group discussions with beneficiaries, national government agencies, local government units, and NGOs in Manila and four provinces in the CAR. Based on these findings, the team presented its results and conclusions to the Department of Agriculture and the IFAD.

Building on the successful completion of the Inception mission in April–May 2006, the IC Net team was re-commissioned to formulate CHARMP 2 from its organizational, technical, socio-economic, financial, and ecological aspects as well as its implementation modalities.

In this, the team (i) carried out in-depth analysis of country settings, macro-economic situations, policy environment and framework on the rural sector, and the roles of small scale agro-enterprises; (ii) in-depth review of the experiences in the Philippines, especially CAR, under CHARMP by the IFAD and projects by other donors; (iii) defined appropriate criteria for the selection of rural areas, villages, and clients/target groups for support, and specific activities funded under the project; (iv) elaborated appropriate institutional arrangements, modalities and decision making processes at all levels under the project; (v) assessed synergies and potentials for collaboration and building stronger partnerships with key development partners such as the ADB, World Bank, UNDP, and other donors; and (vi) undertook an impact assessment of the project on environment and natural resources management systems. The team detailed analyses and design of CHARMP 2, which recommended to maintain the participatory approaches and processes used under CHARMP, while strengthening them further to address the issues identified during the CHARMP, facilitated discussions with the GOP during the field mission. The team’s Formulation Report served as the basis for appraising the project by the GOP and the IFAD. The project was approved in April 2008.