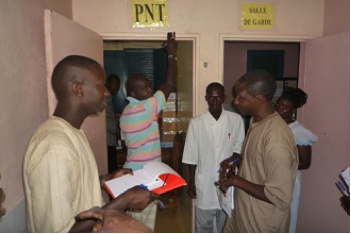 Covering over one third of the land mass of Senegal, the regions of Tambacounda and Kedougo are located about 13 hours southeast of the national capital Dakar. In these regions, health-related indicators such as child mortality, maternal death, malaria, and sexual diseases are substantially worse than the national averages. For instance, the mortality rate of children under the age of five is 200 in Tambacounda and Kedougou while the national average is 121. Poor management capacities, especially health officials’ lack of capability to develop an annual work plan and implement it were identified as one of the major challenges to address. Given this background, the Senegalese health ministry requested JICA for technical cooperation. The Project for Reinforcement of Health System in Tambacounda and Kedougou Regions, Senegal (French Project Title: Projet d’Appui au Renforcement du Système de Santé au Sénégal [PARSS]) was launched in 2011 to strengthen the management capacities of the Medical Region and Health District Officials in these regions. The project was expected to achieve its objective based on the attainment of the following outputs.